I live in Canada.  We have strong ties to the British monarchy, not to everyone’s pleasure,  who consider it, what’s that word for something that is archaic, oh yeah,  a load of shite.

I am not one of them, and in fact,  enjoy the royal family. Queen Elizabeth has been a fine queen, not many could sit on the throne over 60 years, although sometimes my kids say I do. (rimshot)

William and Kate, needless to say, were highly anticipated. He is heir to the throne, and who am I to miss a future king’s visit?

I dragged my wife with me to Canada Place, the port in Vancouver to which they were arriving from Victoria, for their week long visit in BC.

1050am was their scheduled arrival, we were there at 8am or so, with the other die hards. There was a huge media presence as well as various dignitaries.

We were right at the front, and the crowds started building up behind us. With ten minutes to go, a young man asked if he could squeeze in. I said ‘sure’, he was but a lad of eleven or so, after all. (I have a son of 11 who likes the Royals but not enough to wake up early on a weekend) He then bombarded me with questions such as,  had I been to England before (yes) and was that person I was with my daughter? (no) could his cousin squeeze in too? (no)

Then I heard a woman behind me say, ‘let’s rush to the front, it’s only women in front of us, anyway.’ Sigh. It was not untrue,  a good percentage of the contingent WERE women. I, however, was not one of them.

With little preamble and no indication by the burly and besuited security men, the Royal Couple came out. On a tight visiting schedule,  but still moving at a casual pace, with the odd word with onlookers, they glided down the makeshift carpet.

The pictures are inadequate, to be sure. One picture is of an elderly lady’s hands with the Royal Couple in the background. Hello Pulitzer. 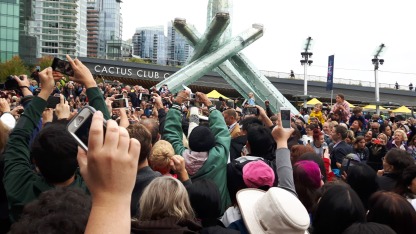