Back in my twenties, I worked an office job for an art supply store, in the marketing department. I put together a lot of advertising, assembled a store catalog, and registered people into various fine arts classes taught by that rarest of birds, successful artists.

There was a lot of down time, especially when my boss went away for weeks on end for artist retreats or trips to Florence. I was given tasks, which I cleverly eked out to last the entire time he was away. I could have done these tasks in a few days but stretched them out, thanks to making elaborate caffeinated beverages with the genuine Italian cappuccino machine. Or miso soup. I made many trips into the warehouse, where grunge music blared, to obtain some products to scan for the catalog. I also, I am not proud to say, took a few items – never anything overly priced (like Winsor and Newton series 7 brushes) but usually more things that there was a surplus of, pens, pencils, paints, and cheaper brushes.

Then I would decorate my ‘office’ with cartoons from the Atlantic or New Yorker. Or some less graphic R. Crumb. My office was really a generous office supply room, but I was happy to have it, given the moods of my mercurial boss. (standing over my shoulder as I toiled away at a layout on my Mac, random yelling followed by abject sobbing when a father-themed song came over the stereo – he had recently lost his) When I ran out of stalling tactics such as these,  I might even leave the office entirely and enjoy a nice mid-morning stroll followed by a chicken salad sandwich at the deli, that I could nurse over for an extraordinary amount of time.

As time wore on, I made less and less effort at maintaining this subterfuge. My boss’s boyfriend, Steve, was showing up after work less and less, leading to even less mood stability. They were in the midst of a long-drawn out break-up.

I remember being yelled at in the stairwell, on my shoddy workmanship, Then, to my surprise, being accused of being on some mood-altering drug! This was probably brought on by my lack of reaction upon being yelled at. (It was definitely not drugs since I had gravitated to the beer-drinking crowd, not the cluster-around-the doors-of the-high-school stoner crowd.) After all, I had been yelled at by the best, my parents, and a few high school teachers.

Possibly it was my ‘Japanese stoicism’ that I had inherited from my father that so enraged him. My mother had recently taken some assertiveness classes, the handouts of which I had perused through. This enabled me to test-run some techniques which were partially effective as it allowed me to stand up for myself, even though I was half-ready to bail on the job. I didn’t have the courage to leave the job cold.

Eventually, I was laid off, owing to ‘a lack of work’, which I was beside myself with joy over, as of a released prisoner. (Reminiscent of my leaving home at 18 to rent a basement suite.) I walked on air for a few days, until certain fiscal realities came to light. A need to pay for food, shelter, all that. I later found out that no one could work with my boss, and there was a long history of quittings and teary departures. I had the dubious distinction of sticking it out the longest with him, which says more about where my head was those days.

The funny thing is, outside of work, my boss was a great guy, lent me his (piece of crap) pickup truck  and trusted me to housesit and keep his parrot fed, when he and Steve went on occasional cruises to LA. I learned how different  people can become in a work environment. Interestingly, towards the end, he did have a revelatory moment when he said, ‘I get it. You’re stoic!’ This seemed to mollify him since the mood-altering drugs theory didn’t really hold water.

I never held the fact that he could be a dick at work against him, as unpleasant as that was. Then again, I’ve steered away from office jobs ever since! 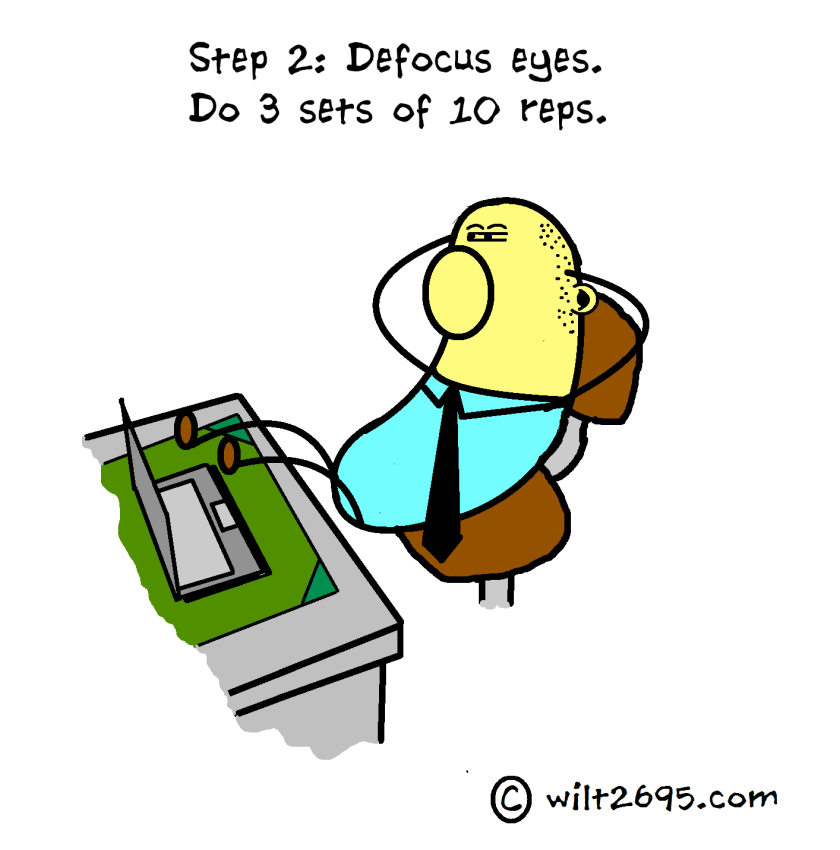 Dumb things ensue, Willy is a jerk, comic ends.
Happy weekend! Anyone back in the gym? Ours is on our balcony!
This is why public schools need to reconfigure their curriculum.
That was our retail mantra.
WILLY'S GREAT DAY
This post dedicated to @crotchetycartoons, whose cartoons imo are like Swiss watches - intricate with a lot of moving parts. Oh, and are peopled with clowns and flies. Just like a Swiss watch! Schadenfreude was a term Ted was not familiar with at first - he despises those 25 cent words. He quite correctly chastises me for my use of them. It's so fun to rattle your cage though, Ted!