I usually enter the New Yorker caption contest – the one where a captionless cartoon is presented, and readers must come up with a clever/funny caption for it. It is voted on, by readers and staff, and a winner is chosen. They receive thousands of submissions. Thousands, which must be sifted through, and collated as: FUNNY/SOMEWHAT FUNNY/NOT FUNNY. I think I know which category they receive the most of.

I enjoy the exercise of brainstorming, and coming up with captions that match the scenario presented in the cartoon. It taxes the creative side of my brain nicely, if nothing else. I then submit it and check in two weeks to see if my caption won. This would then fulfill a lifelong dream of having a cartoon of mine (sort of) appearing in The New Yorker. 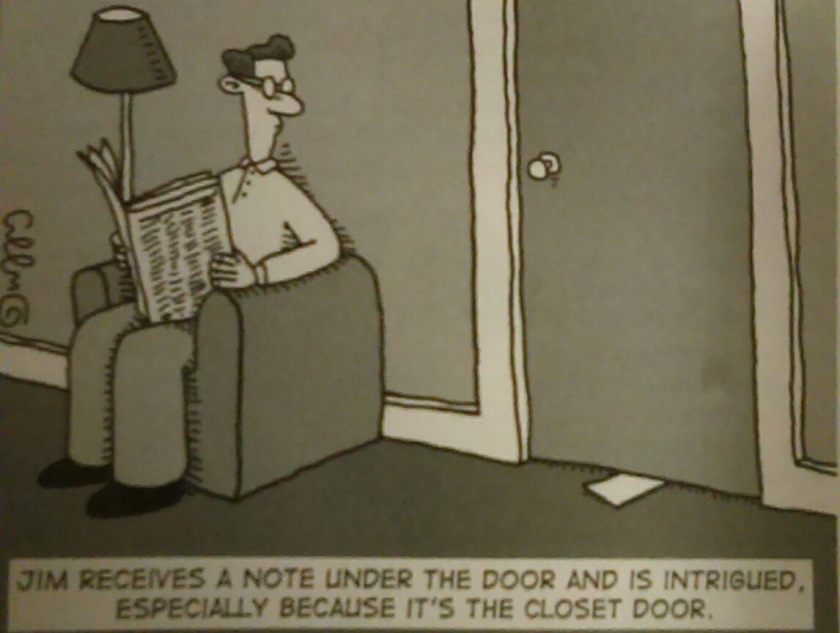 Imagine my surprise when I saw that my caption was selected (and ultimately won) one week! The scenario: The great Sphinx is inside a typical office, before a man at a desk who is saying something, typical job interview cliche. My caption: WHERE DO YOU SEE YOURSELF IN 20,000 YEARS. I won! Yup. However, someone had submitted the exact same caption. Even that exact number. I had read what I thought was my caption, and in my excitement, did not notice that it was submitted by a lady in California. The injustice of it issued a low pressure system that remained in my brain pan for a few days. Prevailing breezes of sense made me gradually come to the realization that they had obviously come across that person’s submission first, thus negating any similar or exact copies.

I’ll still submit now and then – I’m not THAT jaded. I love the gag cartoon format too much for that. Ever since I was a kid I’d zoom to the Saturday colour comics, my highlight of the week. That might explain a lot, given my lack of smarts in world affairs.

Happy weekend! Anyone back in the gym? Ours is on our balcony!
This is why public schools need to reconfigure their curriculum.
That was our retail mantra.
WILLY'S GREAT DAY
This post dedicated to @crotchetycartoons, whose cartoons imo are like Swiss watches - intricate with a lot of moving parts. Oh, and are peopled with clowns and flies. Just like a Swiss watch! Schadenfreude was a term Ted was not familiar with at first - he despises those 25 cent words. He quite correctly chastises me for my use of them. It's so fun to rattle your cage though, Ted!
New comic - Another frontier comic, just because . . .(reading a lot of McMurtry lately)